Karimogi looks like one of those awkward morning kids shows. In fact, the background rendered in-game reminds me of Teletubbies. Most adult players may find themselves weirded out by looking at the artwork. This game has a very bad first impression. I actually thought the game was a joke. Why? First, the title character looks like a ball of blue cotton candy. Second, the antagonist reminds me of Geremon, from Digimon. It does have some redeeming qualities, though. Karimogi has simple game mechanics. Blocks fall from the sky (Karimogis nemesis uses a crane to shower blocks on himor it). You just push the blocks to form rows, and they disappear. Every level, there is a fixed number of rows for you to complete. You are also armed with bombs if things get ugly and need a quick fix. Simply dodging these blocks wont cut it, either. If the room gets filled, its game over. And yes, you only have one life. Drawn on the blocks are various fruits and a diamond, which is confusing. The scoring system largely depends on time spent surviving. I dont get the point of having different fruits etched on the blocks if it doesnt net points or fancy combos. This overly simplistic gameplay is not appealing at first. The blocks are few and far between. You dont spend your bombs, since there is nothing really going on. You just coast your way to level 10. At level 10, things start to get interesting. The blocks begin to fall so quickly. Remember, you are dodging them while keeping them from overflowing. You have to even the field. You push the blocks as quickly as possible before they stack. You have to bomb some of the rows in order for you to climb; once you fall down a pit deeper than one row, theres no going back up. You can only push top-row blocks, so you have to be very careful trudging around the level. Luckily, you can both jump (by pressing X) and push (by pressing Square) at the same time. Also, you can jump and plant a bomb (by pressing Triangle). At this point, you have to take note of everything that is going on around you, for every move must be planned in seconds.
​ 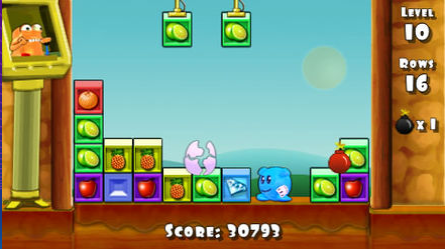 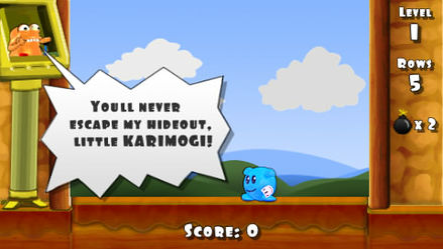