With the release of ten classic NEO GEO titles on the PlayStation Network last January, SNK Playmore seemed hell-bent on capturing the hearts of retro enthusiasts. Regretfully, the publisher seemed equally intent on emptying gamers wallets. Using a pricing model which separated the PS3 and PSP iterations of each game, SNK obliged two steeply-priced purchases from loyal owners of both Sony platforms. When compared to the cost of a PS2, WIi, or PSP disk-based compilation of the same NEO GEO titles, downloading seemed woefully impractical. With the recent release of eight eighties-era titles on the PSN, SNK seems to have listened to criticism from the gaming community. Conveniently, the constrained size of each of these arcade titles has allowed the publisher to utilize the PlayStation Mini format, permitting each game to be played on a PS3 and PSP alike. Likewise, the price of each of these amusements has been dropped to $2.99 (With PS+ subscribers able to grab the games for $2.39,with Guerrilla War being a free, temporary download), making each of these former quarter-munchers a bit more affordable that their swanky NEO GEO counterparts. Yet, the age and simplicity of each game in this anthology will render the collection as a mere curio to all but die-hard collectors.
​ 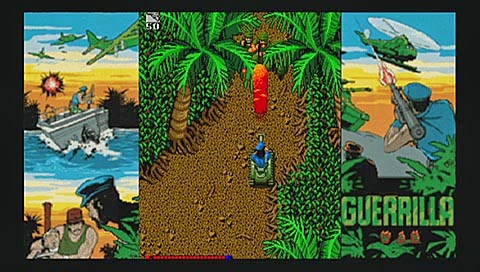